Where have I been?

After returning from Bead and Button, I've been busy completing the last of the Designer of the Year projects for Beadwork Magazine as well as spend much needed time with family.

I am also recuperating from a knee injury exasperated from a fall in February. After ignoring the pain and discomfort for a few months, the injury became "inflamed" and worsen in early June. I could not ignore it any longer after returning from Bead and Button. Anyhow, my orthopaedic doctor states that surgery is not necessary and apparently the remedy to my pain will be strengthening my knee over the next 6-12 months. So I'm allowed to have slacked off a bit the last month.

With the year long assignment of the Designer of the Year projects now completed, I hope to finally take a break from writing and designing to focus back on my glasswork. I had been intensely writing for publication for the last 3 years and need the break.

This month I have been busy in the studio prototyping a new sculptural flower series named Botanicals. The first set of flowers resemble plum and cherry blossom shaping but will be available in many colors. It has been quite fun experimenting and mixing colors for this new series. Other flower shapes will also be developed in the future. A photo will be uploaded on the site/blog soon and the new series will be launched at the San Diego Bead Bazaar in August. I envision the series to incorporate many sculptural floral shapes over time with the primary focus of use for the beadweaver. The floral beads can also be used in other decorative applications and mediums.

In the meantime, I'm gearing up for a nice selection for next weekend's show in San Diego. If you are in the area and will attend, I shall see you there. I hope to not be such a stranger from the blog but life has a way of dealing cards that has my attention focused on many things at once.
Posted by Lisa at 11:14 AM

Lisa
Infinite Possibilities, CA, United States
Read my blog. You will learn a little about "me" through my glass work, jewelry design, writing and photography. The rest? Let's keep it a mystery. 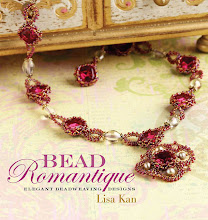 Seventeen projects to keep you challenged from novice to advanced!

About the Book and Ordering

Order my book from Amazon

Seed bead colors to ALL the projects from the book

Major shows and venues I have or are currently exhibiting at:

Magazines and Publishers I write for or companies that have featured my work or products: